This is part of a larger article, Parabolic UHF Troposcatter Antenna for TV and Amateur Radio. 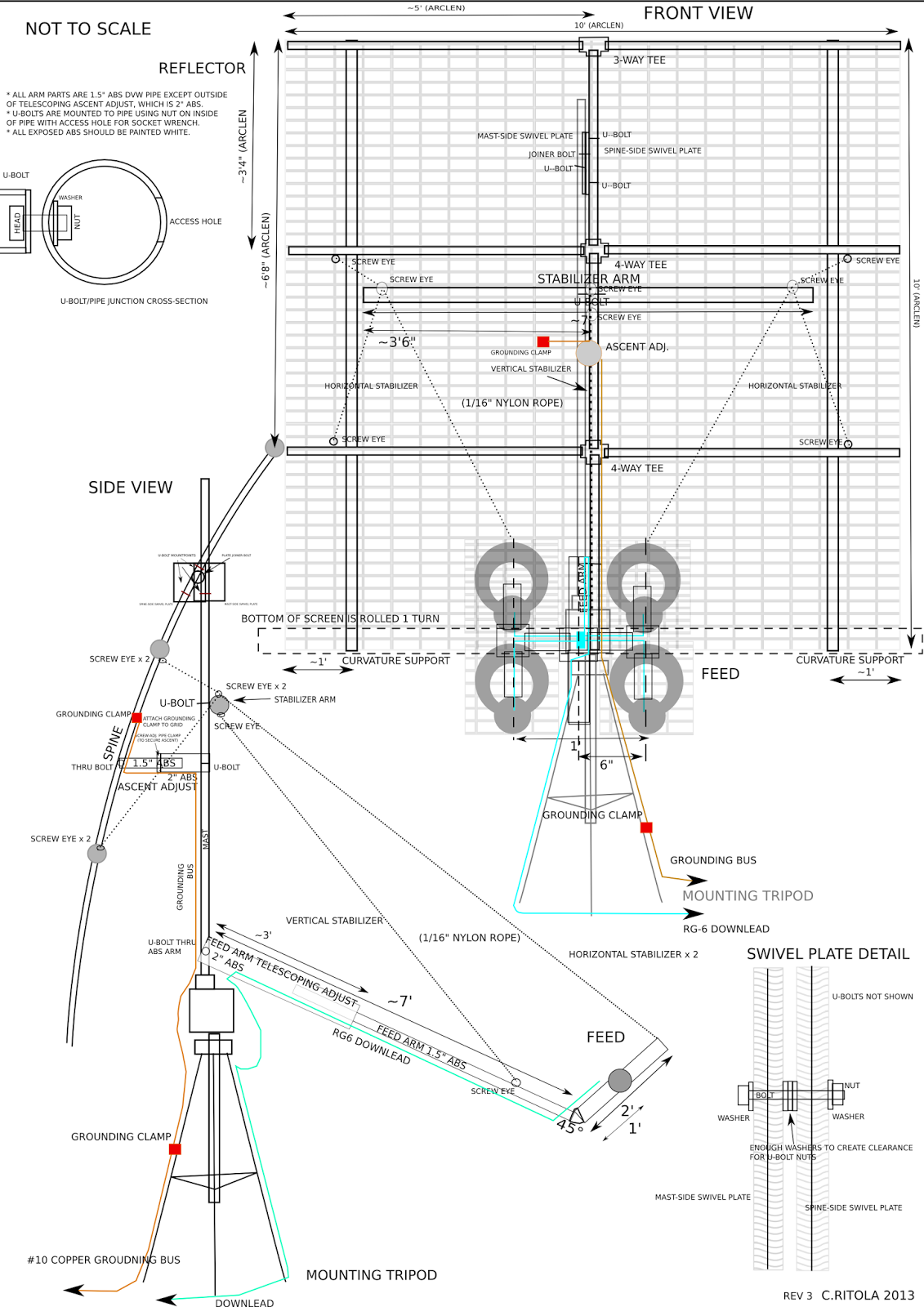 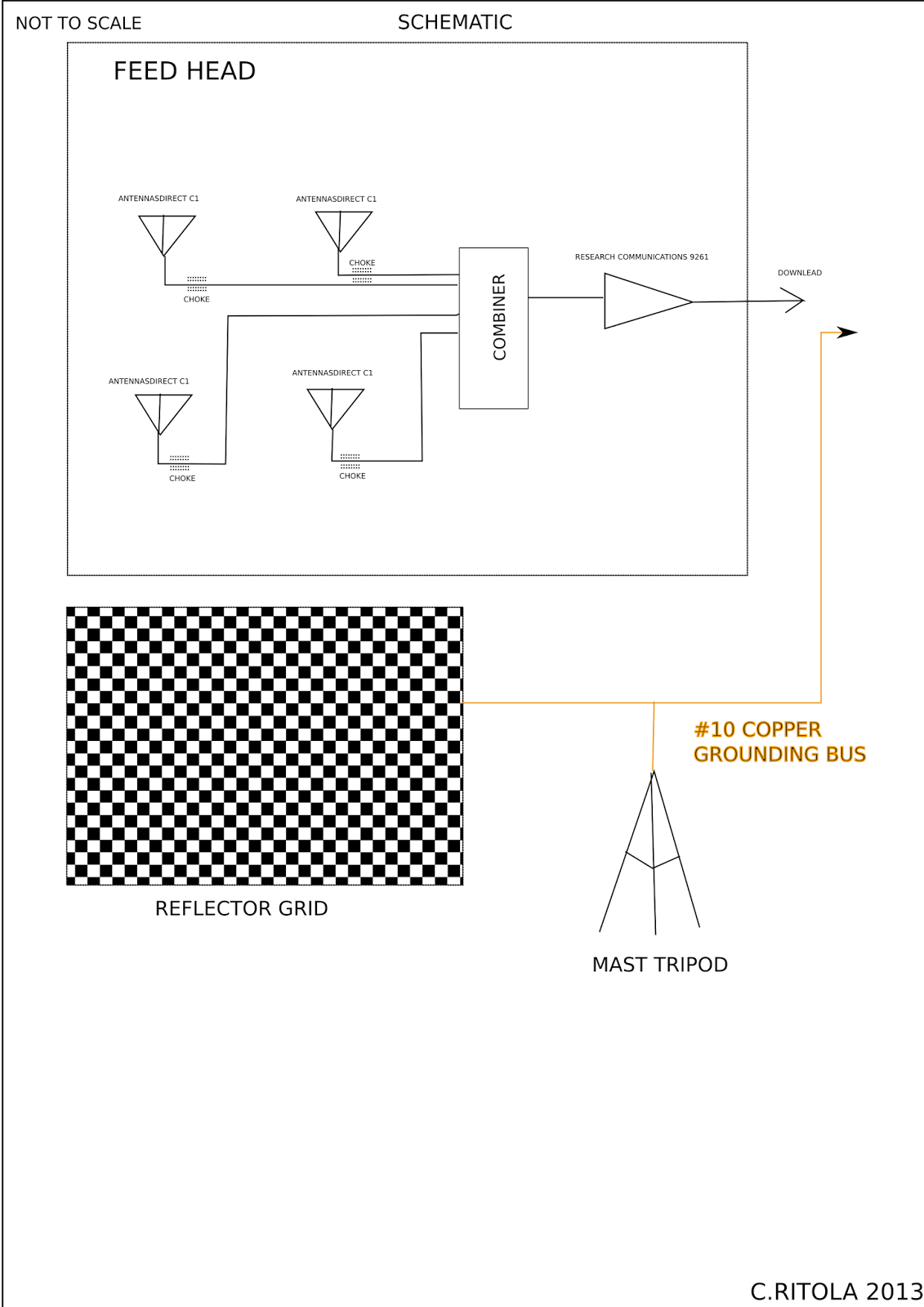 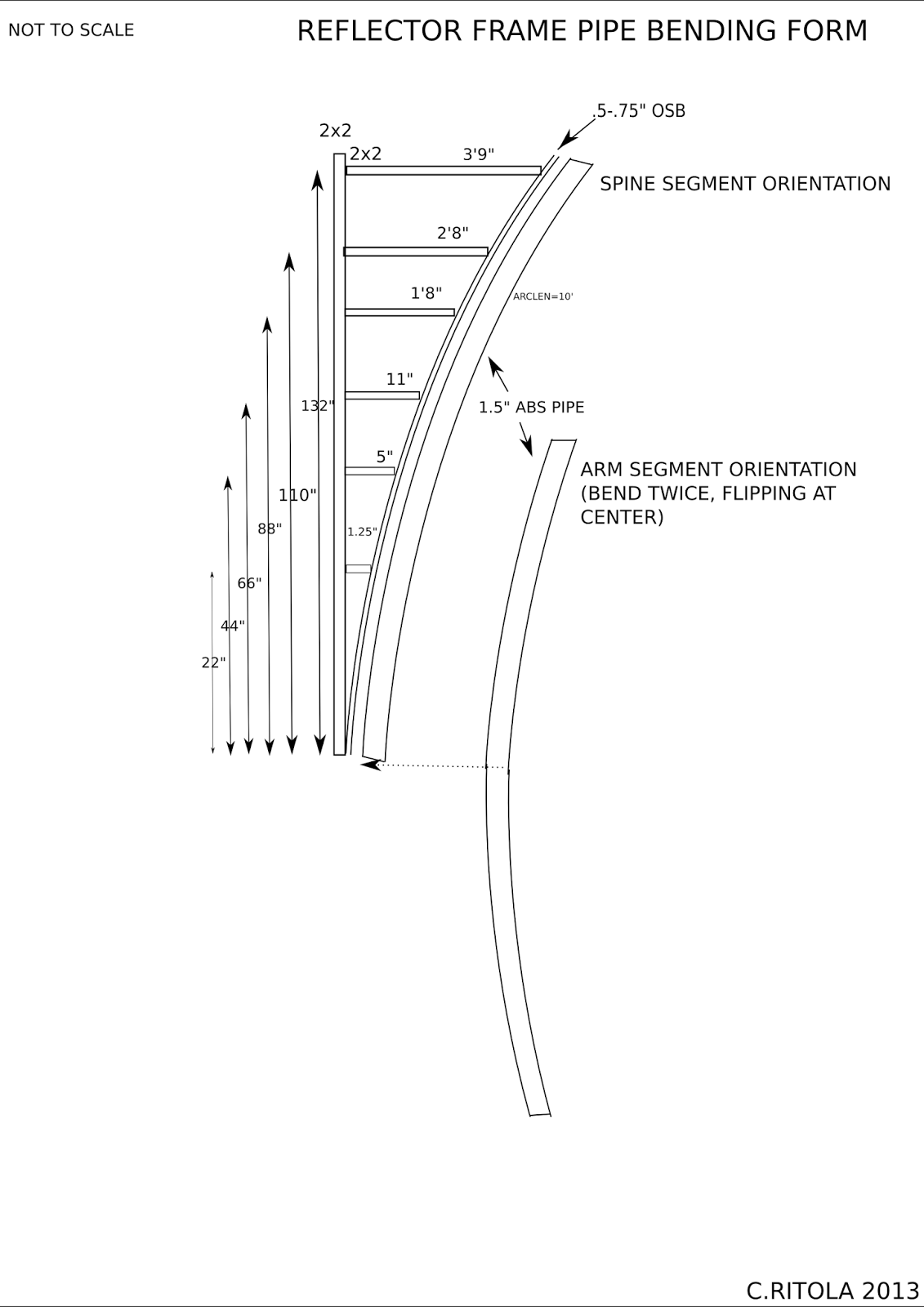 
CONSTRUCTION
All pieces follow same curvature and thus need only one form.
ABS plastic is light and good strength to weight ratio. Must be painted to resist UV. ABS is invisible to UHF.
Spine of form should be at least 2x2 as it must oppose the force of the bent pipe(s) until they soften.
Legs of form were 2x2
curved surface was 1/2" OSB. Overlap not particularly crucial.
Heat gun in 750 degree mode was used, about 20min per end, pipe was covered in fiberglass insulation. If there is a smell then it is too hot. Hair dryer is too weak.
1100 degree mode is too hot; causes burning.
First pipe was overheated and melted on one end, strap was melted. Still usable.
Second and third were doubled into the form. Strap was used mostly near center to minimize melting. Some negligible deformation due to crushing strap force.
Wanted to avoid using sand so that pipe could be heated inside-out without tedious scanning of the pipe with heat gun.
Duct tape was used dead-center as temporary anchor to hold pipes in place while strap was applied.
Duct tape negligibly gunked on the pipe (not surprising as its max temp is close to ABS softening temp). Consider hi-temp tape or remove prior to heat.
Ideas: Use old shirts/rags as straps pending they have high melting point; more surface area, less crush. Or wrap hi-temp insulative quilt.
Not flawless but good enough for the antenna, 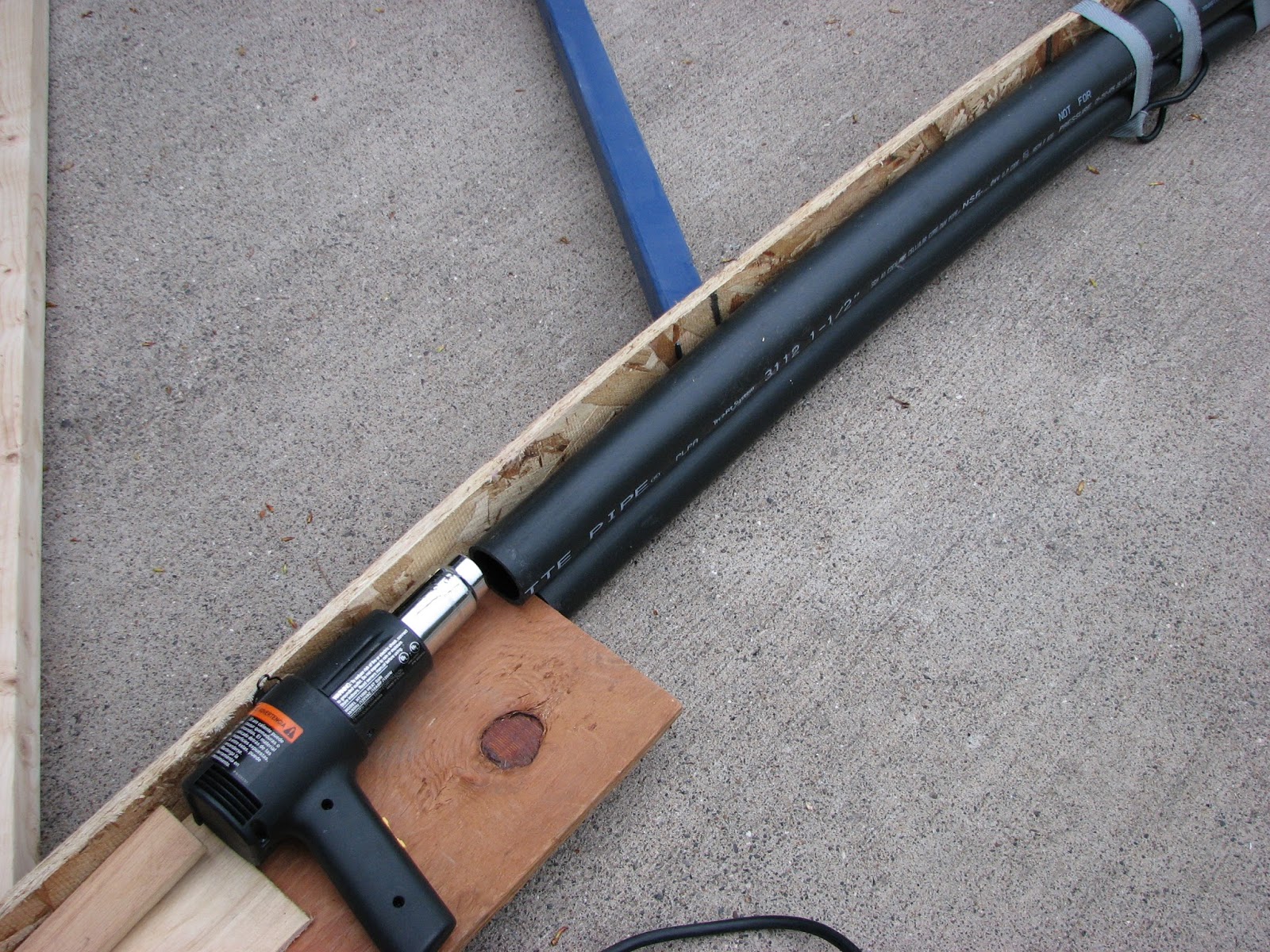 4-way 1.5" tee may be difficult to find as they tend to be banned in plumbing codes. Menards sells in batches in 5 if pre-ordered.
Also consider internet for Tee, as phone searching may be more cost in time.
Mesh attached with zip-ties.
Reflector mesh uses widest squares available without leaking too much of upper frequencies. 2x4" menards.

1.5" high would be ideal however 2" high will be lighter and losses may be negligible.
If using reciprocating saw, use 18 teeth per inch or coarser.
Cut spine into thirds, be sure to label parts and write which way is 'up' and which way is 'forward' such that curve doesn't end up crooked.
Cut arms into halves, label the direction toward the spine so they don't get reversed and 'forward' as with the spine.

Dry-fit the parts, sand inside edges of tees with Dremel grinder if deformation of pipes made them too tight.
Glue, ensure arms are going to be parallel with ground and not perpendicular to spine's curve.
Sand down surface and paint white. No primer necessary but multiple coats needed.
The 3/4" PVC vertical curvature supports on either side of the reflector could have been made of 1.5" ABS as it has similar weight but greater strength due to greater diameter.
Testing finds that PVC softens (and burns) far more easily than ABS. 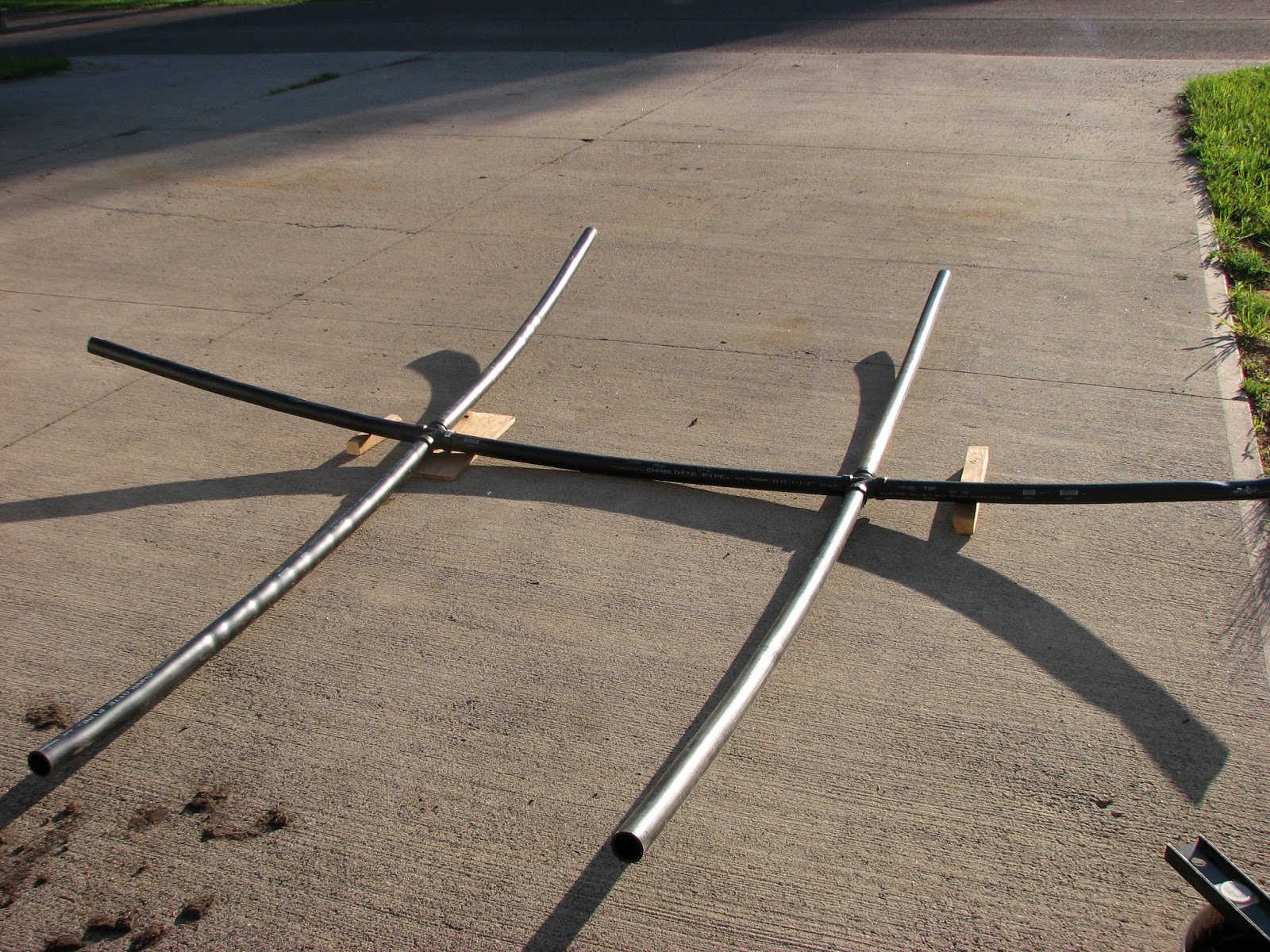 Cut off excess bolt thread to make room. File roughness on bolt after cutting to make easier for nut to thread. The area between the two plates can be separated with all washers or a piece of copper pipe between two washers.

Optionally paint inside of LNA container with conductive paint or foil to reduce static. Drill holes in LNA container for RG6, add LNA, drill a weep hole on the lowest part of container to drain accumulated water. Seal around RG6 and container lid with hot glue (or something better if you have it). Shown in picture is a 98.7MHz choke balun to quell outer shield noise spillage into C1s.


Reflector spine plate attaches to spine with one or two U-bolts; mast plate attaches to mast with one toothed U-bolt. Plates connect with bolt/washers through hole on top right of picture. After parts are attached to mast, all ropes are to attached and secured to screw eyes using wire rope clamps so they may be adjusted easier. (no knotting)

Antenna was built on the ground and modified there before being finalized. This was also important for finding the focal cloud for feed position and making necessary adjustments prior to roof install.

Disclaimers
The brands and products mentioned in this article are for reference and example only and do not constitute an endorsement, recommendation, or affiliation with any mentioned party. Though this information is intended to be useful and functional, it is offered AS-IS without warranty even for safety or fitness for any particular purpose.
Posted by Unknown at 3:49 AM