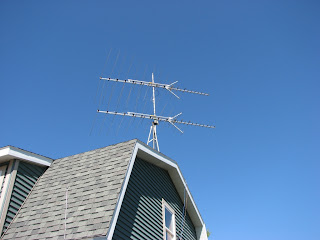 A successful attempt was made at gathering over-the-air (OTA) digital television signals in the Houghton/Atlantic Mine/South Range area of the Keweenaw Peninsula. Those stations which were practically watchable are listed below. Actual channels are denoted by the prefix "RF" while contained virtual/subchannels are listed below them, noting their respective network and resolution. (480 is analog NTSC equivalent). These channels were also watchable without the amplifier, however tropo scatter required the amplifier.

The antenna site is in an area known for direct lightning strikes, on a shallow south side of a copper-rich hill, approximately 1/4 mile from the hill's peak. To the north is a larger hill which mostly obfuscates LOS to Houghton/Hancock. The property is less than 3 miles from a major power junction, with 3 high-voltage lines within this radius. The site is also subject to blizzard  and snow during winters. Temperature is slightly milder than typical midwest. 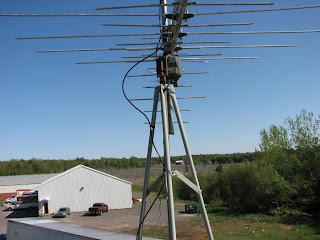 The area has several powerful FM stations within a 10 mile radius, two of which are 100kW and the rest in the 6-30kW range. This becomes relevant later on. Most equipment is either passed down or was readily at hand except for the ULNA, ground wire, tuner, and wifi bridge.

The antenna is a dual vertically-stacked RCA ANT3038XR broadband UHF/VHF attached to a 7 foot mast, fed via RG-6 coaxial to a Lafayette 2-way combiner/splitter which then feeds through a Radio Shack FM trap and eventually to an AbilityHDTV AbilityAmp ULNA/EXT. (20dB NF .7-.9)

The mast is pointed by an Allied U-100 rotor with a refurbished roof tripod installed atop the southmost end of a 2-storey separated garage, approximately 25 feet above ground level. This location was chosen because it is the farthest elevated area from the dwelling, minimizing personal lightning danger, as well as because it has access to the clearing to the southeast. Gain and impedance charts were not currently available for the RCA antennas.

A grounding system was added to the tripod using a clamp attached to a #6 copper ground lead which leads downward along the wall, separated and anchored using porcelain high-voltage insulators. The RG-6 downlead runs parallel to the ground wire, spaced at approx. 6 inches. spaced from the wall using screw-in wall anchors. 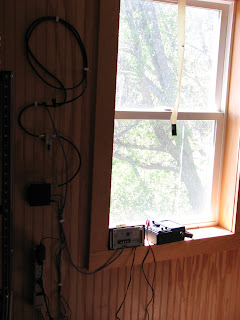 To eliminate the need to bury cable, to maximize lightning isolation from the garage, and to ensure best signal quality, a remote-controlled HDHomeRun tuner was used, which can tune to two separate channels simultaneously and send them as a digital stream over ethernet, which could then be bridged to a carefully-configured WiFi network between buildings wirelessly.

Against the wall, slacked RG-6 is coiled to a 1ft. wide loop then fed through an AbilityAmp DC injector, then to an HDHomeRun LAN-based tuner, whose Ethernet output (100-200MHz) was sent straight down through the floor to the ceiling of the first storey to minimize interference with the antenna array. All of these devices were wall-mounted for neatness. DC power feeds to the wall-mounted devices were strung through a choke magnet as a precaution.

Ethernet from the HDHomeRun leads northward approx 30 feet and then up through the ceiling/floor back to the north wall, second-storey of the garage to a Netgear WNCE2001, serving as a WiFi bridge into the house LAN. It is crucial to accommodate a LOS, strong and stable connection to the WiFi router of the main dwelling such that the sustained throughput meets or exceeds 42Mbps on both RX and TX; any drops below this threshold would result in video breaks from the HDHomeRun. WPA encryption did not appear to cause problems with this link.

The proximity to FM became a serious problem: With no amplification, the stack still overdrove the tuner, with 98.7MHz WGLI-FM (100kW@6mi) creating an even harmonic which saturated RF10(~98.7MHz x 2 = ~196MHz) with some bleed into RF9 and RF11 and even interfering with RF13. When power was applied to the ampifier, most of the low-VHF and high-VHF was overdriven, apparently also overdriving the ULNA, with zero signal quality and no receivable stations other than RF5. Pointing the stack toward any of these FM towers worsened the situation.

Experimenting with a 54MHz hi-pass filter and clamp-on choke was also performed with inconclusive results. 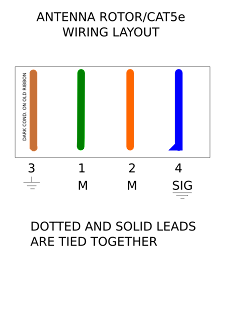 The U-100A rotor's control wire was old and cracked and replaced with modified CAT5e cable such that the four twisted pairs were tied together to make the four conductors needed to control the U-100A. All junctions of these wires were done using screw-terminal electrical blocks which were then coated with SPI conductive silver-impregnated paint. At the entry point into the wall, a lightning drain was installed between the rotor-control line's "common" and the antenna's downward ground lead. The possibility of controlling the rotor by ethernet is being considered.

The brands and products mentioned in this article are for reference and example only and do not constitute an endorsement, recommendation, or affiliation with any related party. Though this information is intended to be useful and functional, it is offered AS-IS without warranty even for safety or fitness for any particular purpose.

Tropo Scatter In Da UP
Posted by Unknown at 2:14 AM